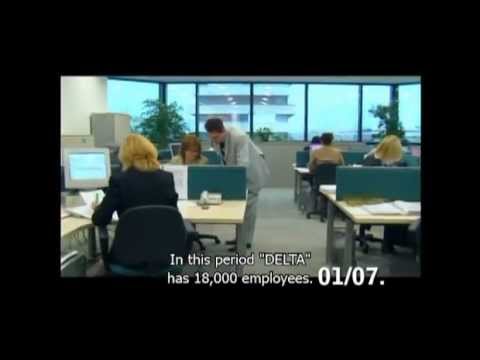 Knowing How to Last

1991/1993During the initial years of company operations, conditions in Serbia were extremely difficult: wars broke out, the country was economically isolated, hyperinflation reached record heights, the international community imposed economic sanctions against the country in which Delta was doing business, big state and socially-owned enterprises had been liquidated and the economic environment had completely changed. Delta laid successful business foundations by making brave and efficient business choices and employing decent staff. Long-term cooperation with the world’s leading companies followed as did the adoption of the business skills and principles of large corporations.Delta was involved in the agricultural sector, trading in fruit and vegetables, and in the timber industry. The company first negotiated contracts with reputable companies such as Nike and Zeneca, and by 1991it had already founded the first private bank, Delta Bank.1994/1999The company’s portfolio had expanded. It assumed in-country representation of leading companies such as Fiat, Nestle, Beiersdorf, (Nivea) and of many others. The resultant isolation of Yugoslavia slowed down the company’s development and caused a stagnation of business in the Balkans. This lead to expansion into the Russian and Ukrainian markets. Two companies, members of Delta Holding, made significant profits for the company in that period: Delta Sport (as a general distributor of Nike for the territory of CIS) and Delta International (as the majority owner of the Baikal Cellulose Integrated Plant that directed its products to the markets of Asia). Such a manner of doing business required a significant number of Delta Holding personnel to be expatriated and or moved from Serbia to the markets of Russia. The Company also started up a completely new business by establishing Delta Osiguranje (Delta Insurance).2000/2007In the autumn of 2000 with the move towards democracy, Delta Holding occupied the leading positions in all fields of its business. Owing to its solid foundations in business and business principles, the company was ready for the return and integration of the country into the international economic market place and system of doing business. The great changes taking place at that time in Serbia resulted in the reduction of business in the markets of Russia. The Company decided to leave the cellulose business and the capital acquired from the sale of the Baikal Cellulose Integrated Plant was directed and invested in the business in Serbia. As Serbia opened up to the outside world during the period of democratic transition and economic reform from 2001 to 2007, the climate encouraged fast growth within the company. The market leadership positions of Delta’s existing agri-business and its representations of foreign companies’ and brands in the domestic market had been strengthened. Simultaneously, the fields of investments had been broadened, and the company had entered new business arenas. With the opening of the first Maxi hypermarket, the era of strategic retail business got under way as the company began to vigorously develop the real estate business.The company has experienced expansion through organic growth but also through acquisitions carried out by its own company for acquisition and brokerage services. By that time Delta Holding had 18,000 employees. In 2003 the company moved into new office buildings in New Belgrade which is company-owned property. When Delta Bank was sold to the Italian Banking Group, Banca Intesa, the accumulated capital formed the basis of a future investment cycle. The company has an important role also in the privatizations process of domestic and socially– owned enterprises and simultaneously has invested into real estate development, expansion of retail chains, and development of shopping malls. Delta Real Estate erected the first shopping mall in Belgrade, Delta City, and not long afterwards Delta City was erected in Podgorica, Montenegro. Then, in Belgrade, the Delta Company for real estate development together with their partner Hypo Alpe Adria Bank Belgrade built the residential area called Belville in New Belgrade, for Universiade 2009. At that time it was the biggest building site in the Balkans. Delta Maxi has expanded its retailing chain and has introduced new selling formats and new brands – Tempo, Honda and BMW are just two of the new companies represented by Delta in the territory of Serbia. Delta Osiguranje (Delta Insurance) also established the first private pension fund, and as such was extremely successful in breaking into the insurance market. It entered into a strategic partnership of a 50-50% cut with Generali Group, one of the biggest international insurance companies. Delta Sport represents Nike. Also, Delta Sport signed an agreement with Costa Coffee, one of the leading international coffee shop chains, with the franchise agreement aiming at expanding the network across the former Yugoslavia and Albania. Delta Sport became the representative of the Spanish Zara chain and sole representative of all Inditex brands for Europe.Delta Holding is also become a partner to the most wellknown global corporations, such as Beiersdorf (Nivea), Unilever, Pirelli, Shell, OM Pimespo, GE... Delta is doing agri-business with companies such as Pioneer (DuPont), Syngenta, BASF...The Company has been achieving its target of being a regional business leader. The Company entered the retail market of Bosnia and Herzegovina through the purchase of the Tropic retail chain. The Company opened its first retail shops in Montenegro and through its acquisition of the Piccadilly retail chain in 2007, Delta Maxi Group has expanded its business into the EU market.

2008/2010
In 2008 the company already had 24,200 employees. The company’s development has been focused primarily not just in the retail business, agri-business and real estate market in Serbia but also in the markets of former Yugoslavia and Eastern Europe. The world economic crisis reached Serbia later than elsewhere. Delta took advantage of the global situation to carry out significant business process rationalization. It could be said that the crisis has strengthened the company since it was a period when the company optimized its businesses, and significantly improved the status and influence of Delta Holding both in the country and the region.The years of crisis, despite complex market conditions, were the years when Delta Holding was doing business at its zenith and the time when the company prepared a forward-looking business strategy for the third decade of its existence.

The year of 2011 marked another great turning point in our business operations. We can rightfully call this period: new Delta.
Delta Maxi retail chain was sold to Belgian Delhaize Group. Delta’s revenues from the sale of companies exceeded 1.5 billion euros.
Delta leaves the insurance business while selling the remaining share to its partner Generali Group.
Delta Agrar remains its strategic business, organized through five estates and food factories: Yuhor, Danubius, Mioni and Florida Bel.
Distribution activities expand by strengthening logistics and particularly by opening a new distribution centre of Delta Transport System.
With excellent operations of Delta City shopping malls and Hotel Crowne Plaza Belgrade, the Company is planning large investments in real estate: construction of a new shopping mall, its new business seat, two more high-category hotels...
Project "Young Leaders" was initiated with the aim of employing young experts.
While smaller in its range, the Company is more efficient than ever and has personnel and organization making it ready for new businesses.

The ceremonial handover of the keys in September 2017 marked the official opening of InterContinental Hotel Ljubljana, the only 5-star hotel and the tallest building in this town. In the same year Delta Foundation has presented the City of Belgrade a sculpture “From There over Here” which will decorate the pedestrian passageway from Kalemegdan to the Sava Pier.

In 2018 the Company starts two new projects – Delta Biznis Inkubator, through which it helps startup development, and Naše selo, the project aiming to start agriculture development in the undeveloped areas and restructuring of villages in Serbia.

In spring 2019 two shopping malls were opened within a week – Delta Planet Banja Luka and Delta Planet Varna. Delta decides to give students a chance to experience the business world during their studies and creates a new educational program Compass.
The Foundation stone for the new headquarters Delta House has been laid at the end of 2019.

The year of 2020 was marked by two major events – the Company announced its new business – regional e-commerce platform Ananas, and bought the Sava Centre, congress, cultural and business center of Belgrade, which is physically connected to the Crowne Plaza Hotel owned by the Company.

Knowing How to Last